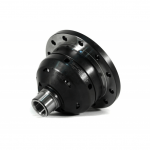 Simply put – Wavetrac is the only gear diff on the market that does not lose all drive when one axle is unloaded. Axles become unloaded in aggressive driving, track cornering, extremely slick surfaces, etc. It happens more than most people realise.

We won’t go into torque bias ratios or the concept of how torque biasing diffs work at this point. Let’s get to how the Wavetrac affects performance:

For example, you have a conventional gear diff (OEM, Quaife, MF, OBX, Truetrac, Torsen, etc.), you’re on a race track for a track day and during cornering your inside wheel bumps over the curbing. This is normal for track driving. The issue is that for the brief moments your inside tire becomes unloaded when bouncing over curbs, your other wheel is not getting drive – is not putting power down. Gear diffs need load on both axles in order to function. The result on a track (or during aggressive driving) is that there are many times when a normal gear diff supplies only intermittent power to the gripping wheel.

Now, same track with Wavetrac: the patented cam device in the Wavetrac prevents loss of drive when that inside wheel is unloaded. The device is able to generate a load inside the diff (to replace the lost load as it happens) that can then be biased to the gripping wheel – in the end making more consistent power delivery through a corner. That makes the car more predictable, and faster overall.

The beauty of the Wavetrac is that it is ideally suited to high performance road cars that see track use. It is very strong, yet transparent to both driver and traction control electronics during regular driving. On the track or in spirited road use, it provides drive to both wheels without the handling issues that traditional clutch type diffs create (there is no tendency to push/understeer with a Wavetrac).

The Wavetrac outperforms other gear type differentials because unlike them, it won’t lose drive when one axle is unloaded (which happens more often than you’d think).

Lastly, one of the most underrated benefits of the Wavetrac is its smooth delivery of power near the limit. Its patented design makes for a very predictable, smooth addition of power when you need it most – when things are at their limits: on the edge of traction mid-corner and using throttle to keep it there; or coming into a corner a little hot, but quickly back on it to maintain exit speed…

These situations are often subjective to the driver, but the benefit can be felt. The Wavetrac makes you faster because it lets you drive with confidence. Smooth is fast.

You've just added this product to the cart:

Trade accounts are now being accepted again! Get in touch for more info. Dismiss